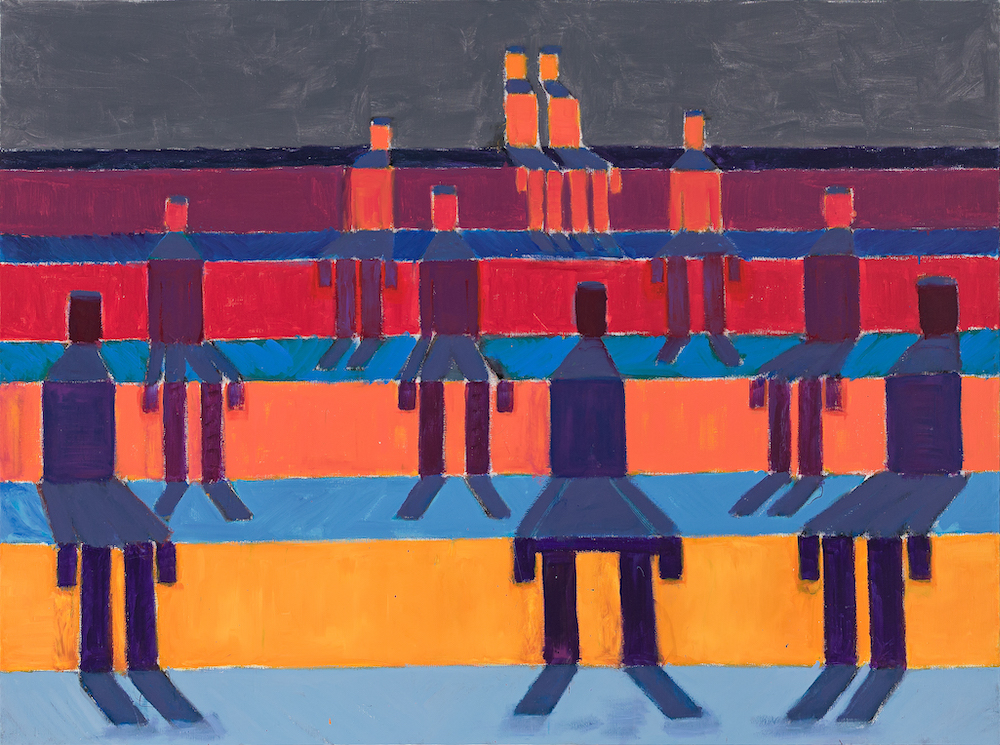 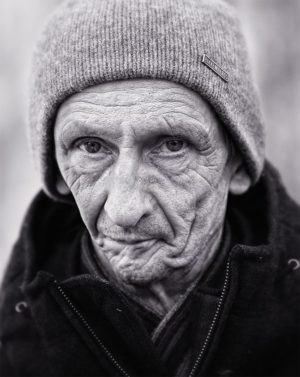 For Sergey Laushkin the system of perspective is his private and free choice. In this he sees the advantage of contemporary art over the traditional art. Distortion of one or another perspective or a combination of methods from different systems characterize Sergey’s usual creative process. He experiments a lot with the invention of shapes and boldly uses different types of perspective in spatial solutions. Sergey Laushkin calls his method of work perceptual.

Since 2012, the artist has been developing a painting style that he calls “stepped”. The idea was born during the preparation of the art project “Pack of Steps” for the “Night of Museums – 2012” in Yekaterinburg, when Sergey depicted a pack of dogs on the steps. And in 2018, at his personal exhibition “Stepped Rhythms”, he demonstrated pieces from the “Zone of Steps” series (2014-2016). This style features geometric shapes, abstract depiction of figures and objects, graphic design, laconicism and active color. Compositions are usually of open frontal type that is characteristic, for example, of ornaments. A step is a unit of composition. The visual space is filled due to the absence of margins and the details that go beyond the canvas – lines or steps can easily be imagined outside the picture. This space outside the picture gives rise to the development and dynamics to subordinate elements. The gaze freely leaves a picture and the undrown parts can be easily followed. Sometimes, the composition has no center, or rather, it consists of a set of equal centers that fill the image area. Thus, in the series “Spectators” (2018-2020), each seated figure is the center of itself and each next one can become a center outside the canvas.

Sergey Laushkin often divides the composition that enhances the rhythmic expressiveness of a piece. Each figurative element is broken down into color spots. The picture is perceived first as a collection of color cells, and then as an image of figures and objects. The expressiveness and dynamics are achieved due to the irregularity of intervals between the steps, the size and color of elements change all the time, it makes the composition more intense and the entire work more dynamic.

Sergey Laushkin combines several systems in order to convey the volume of objects and the depth of space. One type of his spatial solutions includes summing visual perception. Sergey Laushkin’s stepped perspective implies the change of a viewpoint or a variety of viewing positions. The general visual impression together with a comprehensive overview reveals some specific deformations that are also characteristic of the reverse perspective. Objects far from the viewer are depicted as the larger ones. The lines do not converge on the horizon, but within the viewer. Violations of the direct perspective bring Sergey’s paintings closer to the work of the icon painters from the Ancient Russia.

In the paintings of Sergey Laushkin, you can also notice the parallel spatial constructions characteristic of the medieval Chinese painting and the Japanese woodcut ukiyo-e school. The lines of the side surfaces do not converge at an ordinary point on the horizon, but go parallel to the depth, which limits the planes and makes them look the same, symmetrical. If you put a canvas on the floor and look at it from the top, it will be almost literally possible to enter the image, sit in an armchair among other spectators or sit on the steps with the heroes from the painting “Family” (2017).

Sergey Laushkin does not seek to predict or program such a pattern in his pictures. Rather, he conveys to the viewer his immediate mood, a vector of motion. This is the case with those who look at the triptych “The Myth about the Zone of Steps” (2015). A viewer’s gaze now settles on a step, then climbs up, then falls down the stairs. The stepped perspective method implies that the author, and the viewer after him, cast discrete glances, which then gather into a mosaic. Accordingly, an image does not require volume, it tends to flatness and convention. The stepped rhythm helps to enhance this discrete effect, sets the viewer’s perception to the desired mood. The technique is similar to film editing. The order, in which the painting is read, is no longer so important and does not require planning on the artist’s part. The deformation of an object in faults, shifts, the appearance of new planes presupposes the synthesis of visual impression. These deformations are an abstract system, a formal limitation, taken by the viewer as a preset; a guide to direct their impression.

The stepped rhythm has become a universal language for Sergey Laushkin. Stepped perspective through the synthesis of visual perception turns into a guide to the text of his paintings. The viewer, together with the artist, stand on the stage, sit exhausted on the steps, go up and down the stairs. The main thing is not to stop, Sergey says: “The stepped rhythm is everywhere: in the animal world, in man. The planets do not rotate along the axis in one place, but spiral upward, and thus also create steps.”