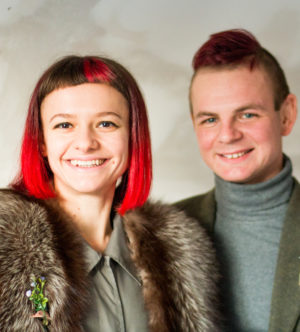 Mischief became the subject of a serious discourse, prank dived into modern philosophical trends. Artistry has turned into a character trait that fills up a creative individuality. Life mixed with art practices. Action first, then word, interpretation.

Copies are art, as art is a material. Let me explain: all art has already been invented. What is left is using it as a material.

Perhaps, modern Eden is an amusement park, but oblivion is all that’s left for you there. At least one can live in the modest "Eden" of the Cherepanovs.

What’s the big deal? You just take and transform:

a plastic bag – into a magazine, a cardboard – into a canvas, a walk – into a movie, a meeting – into a performance, a wall of a house – into street art, experience – into research, research – into life, life – in art.

And an article about artists – into a play!

Before you start reading the text, we strongly recommend that you warm up. Remember: tight muscles interfere with the full-blooded perception of art.

Duet of the Cherepanovs (they are the cool snake, “Endless private sector”, Cick in Dunt, “Yugo-Zapad”, “Tagil” group, “ZhKP” and “Anti-ZhKP” in one person)

An image of a punk buffoon is an important archetype for the Urals. This embodiment of a local artist is a dense clot of the dusty atmosphere of Yekaterinburg, which is unlike it and at the same time awakened by it. In contemporary Ural art, the punk buffoon first finds expression in the 1990s in the character of an old man B. U. Kashkin. In the early 2010s, this image manifests itself in Nizhny Tagil.

The new outbreak was ignited by the “Life as Performance” group, and the Cherepanov duet is their masterpiece.

Mischief became the subject of a serious discourse, prank dived into modern philosophical trends. Artistry has turned into a character trait that fills up a creative individuality. Life mixed with art practices. Action first, then word, interpretation.

A House in a private sector. Workshop

Anya and I are talking. She does it by means of a picture, me – with words

Anya frequently uses oil, spray, marker, and collage at the same time. Often by using paint from a can she creates the base for a composition or marks accents.

I look at the weird funny pictures. They have accidentally tangled lines, careless strokes, rough-textured shapes, torn composition. And they may also contain pieces of fabric, wool, and sometimes other paintings. You look and don’t get it: isn’t it just for fun? And then you interrupt yourself with a rude: “And so what?”

A canvas, like a wall, is just a plane. Plane binds space, it does not allow to enter into a painting or fresco easily, without knowing the rules of perspective. But if these rules don’t work, what is left? To glide along the surface, feel the details of landscape, delve into the rough fabric of reality. Uneven, shaggy, liquid, shapeless, chaotic, alive …

It’s even cool: you can paint a landscape, but sign with a tag, like on the wall of your house. Such an unusual game.

Anya and I are listening to Vitalik

– The moment will come when we start to get rid of all our practices.

(Vitaly writes the legend of the artists Cherepanovs, sincerely, without pursuing religious motives in his searches.)

– Recycling is Postmodernism in its purest form.

(This is not an icon at all, but the work is based on the same rite.)

– But what is the repetition of postmodernism?

– The very concept of a genius is irrelevant today. Genius is created by the general environment. Society is a genius.

(Repeating the variants of development of the events in his own life many times, which is often utopian, the artist draws a “map of desires” in an iconographic manner and willy-nilly reaffirms the cult and power of kitsch.)

– Copies are art, as art is a material. Let me explain: all art has already been invented. What is left is using it as a material.

(Right now, I’m copying Vitalik’s words from the interview, because copying is creating.)

Volny Park. Recording is on

Me and the Cherepanovs duet

The failure of “ZhKP” stimulated the creation of the “Action Dice” project. It is a bold decision to interfere with the art market rules, it was taken after the success of the first Actions.

Relationships are built during the Action: spectator – player – collector – presenter. Roles are not assigned. You can be anyone at any time.

The same means – obsolete useless things. You have to do your best so as not to hear. Not to see. Not fall in love.

At first, ZhEK art irritated the Cherepanovs. Dirty rags, shabby toys, old Soviet furniture, broken, unnecessary, lifeless objects … All this long-term melancholy triggered disgust, brought up associations with old women who hypocritically blame street artists for damaging public property and at the same time out their trash in the general yard. The project started with a wish to understand the other:

– We always take on what seemed to be a failure from the very beginning.

The Park Volny is the Muzeon of everyday life, where ordinary objects cease to be meaningless and get filled with poetry. In this place, all the Cherepanovs’ practices merge.

Perhaps, modern Eden is an amusement park, but oblivion is all that’s left for you there. At least one can live in the modest “Eden” of the Cherepanovs.

– For us, art dwells in everything. It is an obsessive state.

(It seems we arrived.)