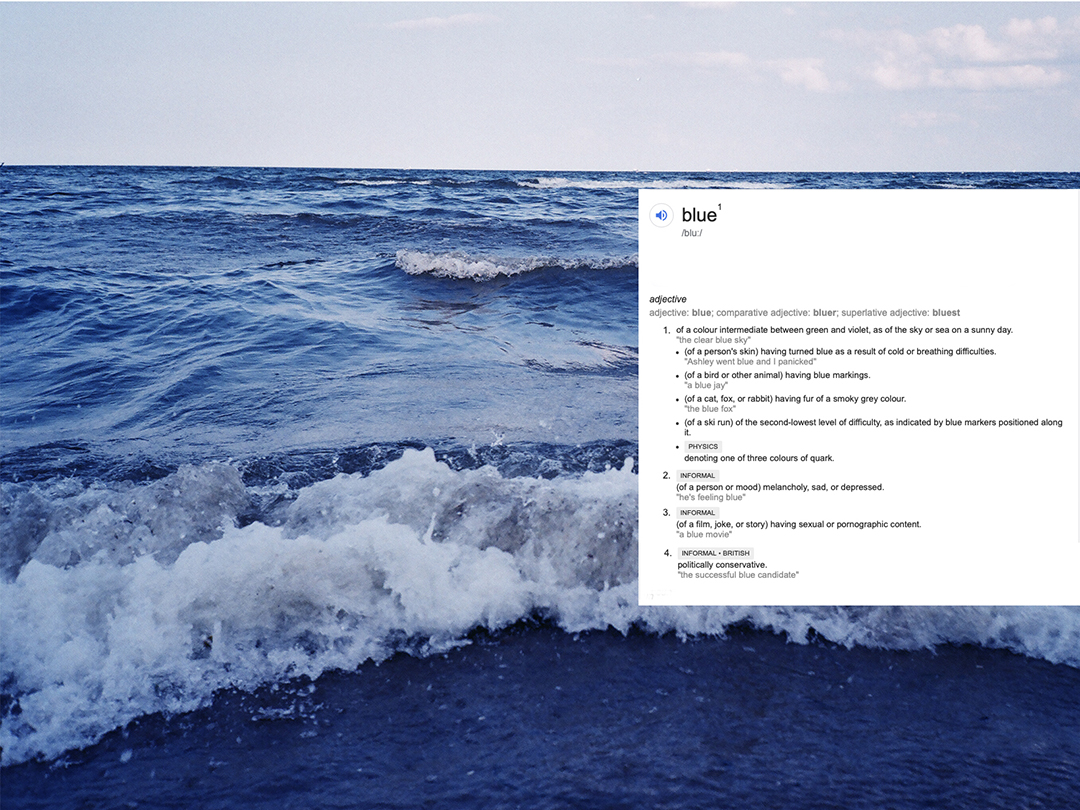 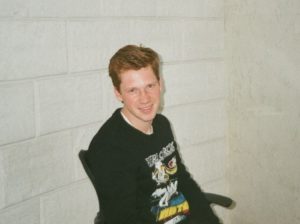 Painting extends to the walls, ceiling, windowsill. Painting does not lend itself to the external influence. Painting expresses itself. Roman Tcherezov is an artist who creates all the conditions for the painting to implement itself. So that it would gain visibility and subjectivity – its agent nature and the ability to go beyond, to get out of the frame. Discard the need for a figurative message. Become pure color that obscures all the objects around.

Scrolling the news feed, I see several photographs documenting Roman’s intervention. The first image shows two pictures stitched together: an ocean and the definition of the word Blue. On the second one – there is a five-story panel building. All windows are shut, except for the one: where three shapeless items seem to be hanging to dry.

From the window of not my apartment I hung a blanket in colorful covers, which had three shades of blue. Later, I noticed that when I walk down the street, I see blue signs, turn signals, cars, safety nets. I wasn’t expecting to see such an abundance of blue around me. I started thinking about the canvas space. For me, a metaphor of a painting extending to the space became important. Blue – sky, sea, water – it’s something that has no boundaries.

The work is supplemented by the dictionary entry with several meanings of Blue – thus different interpretations are set based on the word’s meanings. Roman recalls the Joni Mitchell song Blue, and I recall the Fats Waller song (What Did I Do to Be So) Black and Blue. In his song, Blue is the name of a beloved person, in mine Blue means sad.

The move from plane into space takes place in the dialogue with professors from the Academy of Fine Arts in Munich. Prof. Axel Kasseböhmer carefully puts strokes on the canvas, accurately defining the purpose of each one. Prof. Schirin Kretschmann denies the limitations of a picture in a frame and lends all the space to the artistic process, which defines the basic terms and guidelines.

In classical painting, dripping paint is a decorative element, it carries no function. I wondered do a wall and floor become part of a picture, a painting at this moment? This is how my painting started to expand into the space. The paint ran and filled all the space around – should I to stop this process?

After interacting with each professor, Roman sees the continuation of a canvas in space, on which one can work with pictorial means.

A dark gallery located in the passage between the underground and street transport. The chill at this place with no natural light was softened by the radiating heat from an installation out of light bulbs, emitting orange light. Pigments were scattered nearby, they changed their position, depending on the vibrations caused by a passing train. Vibrating and jumping, they independently made scenic transitions. Roman filled the room with a glow and dispersed the pigments around the space.

The starting point was the location of the gallery in the dark passage. It was February with an accompanying cold and short daylight. So, I wanted to add light and color to this dark room. And thus the name of the work came about – heaters. Indeed, I spoke with the visitors, some had the feeling that the piece emanates warmth, like a radiator.

The color that is perceived by everyone and devoid of associations. Color, light and form are the first things that a viewer sees and does not articulate with words. The world does not consist of words, but of tints, shades and sparkles. When opening a blackout curtain, I see how the rays of light refracting through the grate of the window scatter over the floor. I see and guess: it’s daytime outside. But I don’t need words for that. I see and immediately experience many vague feelings that do not require a verbal expression.

Roman looks at the light and concentrates his gaze on a certain area of the passing glare. Munich is located in the south of Germany, on the river that starts in the Austrian Alps. The sun shines 1777 hours a year there. Alexander Chizhevsky in his work “The Earth’s Echo of the Solar Storms” wrote about the influence of sunspots on mass cataclysms. This means that Roman’s move may have climatic reasons.

Roman agreed that the world is not anthropocentric (the conversation was limited to the planet where we both live). The same applies to painting: what appears on the canvas is accidental, like the artist’s actions. Roman only creates the conditions for a painting to create itself.

I poured water onto paper and then added ink. Due to the concentration, water temperature, paper thickness – properties that the artist cannot influence – a work emerged.

Roman arranged a meeting of paper with ink, pigments with floor vibrations, lamps with viewers. A meeting that does not require a single worldview or language. A person will not speak to the lamps in their language, but can turn on the lights and thereby impact it.

Roman defines his practice in terms of painting that runs and spreads in space. Painting is no longer two-dimensional, but has its own form and outlines. It becomes a place of communication, where color and light are redefined as tools for the two-way interaction; painting becomes an opportunity to feel and reach understanding. “Art is a state of meeting,” writes Nicolas Bourriaud, and it is hardly possible to coin a more exact phrase.