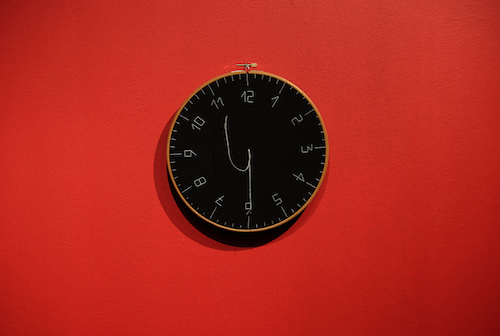 Asya Marakulina thinks in her material, not through it. Nor does the material convey a thought. Her works are, quite simply, thoughts. This is unusual. It is simple, yet difficult. Perhaps from time to time this happens in poetry. Or in a diary. But in the visual arts, we tend to talk about how a work of art is the result, or the trace, of thinking. This means that thinking is first thought, and that it is then either made manifest or processed through the act of doing or through something done. Or we might say that a work of art acts as a generator of thoughts in the spectator, in the artist, or in both. Working with thought as a material is something entirely different from conceptual art. Not least in the Russian context, we recognise conceptual art as an expression based on an idea, or concept, which takes precedence over material or aesthetic considerations.

With Marakulina, we do not find any de-skilling. On the contrary, her craftsmanship is outstanding. She does not convey thoughts through her art, which is something we have become accustomed to in what has, somewhat carelessly, been labelled post-conceptual contemporary art. Instead, the thought is art, and art is a thought.

Conceptual art has, however, indicated that when you work with thoughts in your material, this does not necessarily mean that it’s incredibly important which material you use. It can vary. But, with material thought and thought material, this becomesmore complicated. In Marakulina’s case, we often encounter embroidery, textiles, drawing, animation and installations. When approaching an artistic practice, it is still often important, if not central, to understand how a particular material stands in relation to an idea. But, in Marakulina’s practice, where thinking takes place in the material — it would seem that material is of the utmost importance while it can also be as malleable as thought. While it doesn’t matter which material is used, it is all the same very clearly defined. It is not possible to use whichever thread you happen to have laying around when thought happens within embroidering. And if the embroidery-thought is dependent on, or integrated into, a video projection-thought; it will be crucial to pay attention to the type of projector.

Thinking in one’s material is simply an existential condition. Thoughts are not something we have. They have us. They need their own rooms. In order to think in one’s material, one must therefore look for the rooms and situations where certain thoughts want to be thought. Over the years, Marakulina has become an expert at finding such places. Frequently, these places do not exist for very long (perhaps they are as ephemeral as the thought they are). Consequently, the task of writing about an artist who thinks in her material is a peculiar task, and this text has been repeatedly re-written: Perm’s history, geological time, meteorological extravagances, deliberations on art and labour, poetry and art, the importance of the studio, and

so on. They were all quite good and somewhat entertaining drafts, and during that process, it became clear that an artist who thinks in her material is indeed trying to grasp Time itself. Marakulina was clear from the start with her scepticism towards text as a medium for conveying what she does. A text could possibly describe what the things she has done look like, or what she has said. But rather than heeding this warning, I took it as a definitive challenge and now I have to face the music.

Through these drafts, it also became clear to me that the process of thinking away thoughts that are not in the material of the artwork makes up a large portion of the work. Marakulina knows this, and that is why she also is careful with her time, with her routines. She sometimes takes time off. Has a weekend to herself. This is unquestionably a prerequisite for being able to do what she does. Art as life, as a job. She also goes to work and thinks in her material when she does not want to. The rhythm is determined by thought.

What then is a work of art that is in itself a thought? Our thoughts are perhaps the most distant from us. According to the German philologist, thoughts are the shadows of our emotions, always darker, emptier and simpler. And it is probably true that thoughts come after perceptions and sensations such as sight, smell, sound and touch — that they are shaped by the world around us. But they also form it. And what does it mean for a thought to be a sensorial object?

Marakulina’s first room of her own was a studio shared with another artist. Every day she would go there and come home again. The studio was located at the top of an office building run by the art group Nepokorennye, ‘the undefeated’ (I guess the name alludes to the filmmaker Mark Donskoi). The only windows on that floor level were in the corridor, where she would later host an exhibition. She wondered, why bother having a studio if the path taking her there and back was more interesting. “Everything I do is about observation, but perhaps a particular sort of observation”, she says. The exhibition mapped forms of clouds at the moment of observation through the windows of the corridor, crafting a kind of meteorological animation, and the installation conveyed observations from the path between home and the studio, landscape drawings of suburban housing, and at the far end, in the darkened studio room, a small hole found in the outer wall turned the temporary atelier into a Camera Obscura. With the outside world mirrored and inverted on the inside, a cement box momentarily transformed into a room for magic (that hole had, in fact, been made by a previous tenant’s father, and it created a Camera Obscura effect during daylight. After sunset, Marakulina used the perforated wall as a projection surface for a window of sorts in which both a physical and conceptual hole could be sensed).

Marakulina says that she usually starts by drawing. Sometimes that is enough. It is a kind of intuitive choreography. “It’s easy to finish things”, she says, “because if you are constantly in a process, you need points of orientation.” When thinking in your material, it is clearly important to take breaks. “Better to do less, have time to process the experience and to digest it.” She also states that she grew up in an environment where everyone worked. They worked with different things but there was a common ethic in which you do not waste time, create value, so that life also can have a place. Leisure and work are separated. Free time is needed in which to think the thoughts that are not in the material. When we are tired, we are attacked by ideas that we suppressed long ago.

A library. Drawings on the glass. Observations of what is happening outside the window, on the glass vitrine. The perspective in the drawings, viewed from the street, is from behind the glass. I see what she sees, but mirrored. The pigeon behind me is depicted on the glass in front of me and the artist is standing in her aquarium — the epitome of the open floor plan office of contemporary labour. She’s working. Talking on the phone, drinking coffee. Drawing directly onto the glass with a white and a black marker — those on the street look at her and she at them. She makes notes on a drawing pad and then puts up the picture in the window display. The drawing obscures the view but at the same time makes visible what she has seen. A frozen moment in someone’s routine chores is placed next to another while the cars drift by, reflected in the glass along with the clouds, like a river in front of the white paper sheet with a drawing of the everyday life taking place on my side of the pane. A pram, a couple pulling suitcases behind them — everything carefully recorded with exact time indications; at 14:39, a dog was tied to a pole that actually appears to be the remains of a dilapidated park bench that can no longer be sat upon. 16:53 — someone passed by with a grocery bag; her posture seems to reveal something but this is undoubtedly a projection from my side. For ten days, an exhibition emerges in the ten-metre-long library window. Someone stops and sees himself. Yesterday he passed by the window with his bicycle and may be reminded of a jokeon his mobile. The artist squints with one eye as she draws the contours of what she sees on the other side of the glass. The marker pen jams, the model moves. Everyday life rushes by, as fleeting as the thoughts it houses.

Time and time again, I am tempted to call it poetry, or at least poetic. But it is art. There are no metaphors or intonations. A Room to Rest is, at first glance, hardly a relaxing environment. Who is going to rest here? The hammock has a large hole in it and the pillow is balancing on a hard steel cube. The title alludes to Virginia Woolf’s extended essay (A Room of One’s Own) but the room is hardly that precarious sphere discussed by the author. And this room for rest is in fact four: one black, one red, one green and one grey room. Between the rooms, there are portals of some kind. In the middle of one of them, there is an embroidered black clock, with an embroidery frame forming the clock face, and threads and needles serving as the clock-hands. It is unfinished; the knot is not tied. The time has not yet been set. It strikes me that this is a room to think in the material. A room of one’s own for thought, where the thought, the artwork, can rest.

The balance between intimacy and intensity is something that every exhibitor struggles with. It is between these two poles that a work of art oscillates. Sometimes we seem to think that we can replace the former with the latter by turning up the volume to compensate for the acoustics. My impression is that Marakulina repeatedly succeeds in doing the opposite. The two-day studio exhibition Insight grew from still-life drawings, depicting potatoes in different stages of their lives. Then she cultivated potatoes in her studio in order to invite people to find their way back to process and desire.

In a situation where everyone else is screaming, it can pay to whisper. This cannot least be seen in how she has chosen to work with the Moscow Triennial, where she creates a room within a room by occupying different spaces and ‘non-spaces’ — under the stairs, in a passage and so on. Soft toys on backlit steel supports, a giant pencil (the Agents of Intuition series). These works are aphorisms — a cluster that embraces an at once contradictory and seemingly paradoxical thought. It is joy. A room for thought; a room in which all feasible paradoxes are in my head while existing as objects in the room. I contemplate of the experience of literally having multiple selves within a single body. Achille Mbebme wrote: “We are twelve in my body. We are packed like sardines.” In other words, the beings that I am exist each in several modes — or, let’s say, several beings, which, although sometimes mutually exclusive, are nevertheless inside one another.

Thoughts may be the shadows of our emotions, but they are also their mirror image, with all the inversions and displacements that entails. In Marakulina’s work, emotions are reflected in thought as material and in life as art — life appears as a thought, a reflection.