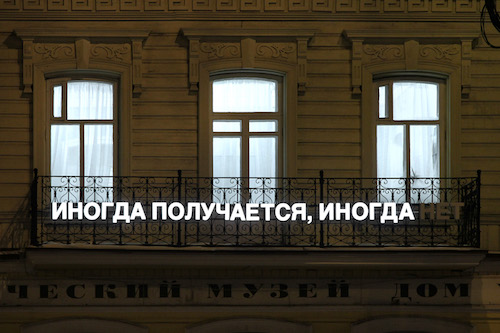 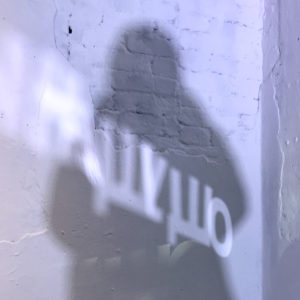 On the texts, gone with the wind from the museum window

Living in a museum is easy for works of art. They hardly have to do anything to be recognized as art. Put a box of matches on a pedestal, hang a label next to it — and it’s art. Even a fire extinguisher in a minimalistic and whitewashed exhibition hall can turn into a work of art in the eyes of an inexperienced visitor. We can say that a museum building is a kind of greenhouse, a protected environment, in which art grows on its own.

How different it is on the street, though! There, in the midst of the daily hustle and bustle, a work of art must first manifest itself. It has to put in a lot of effort to attract the attention of the passers-by. When someone finally notices it, then it has to figure out how to survive in a hostile environment. Unfortunately, in many countries, any work of art in a public space must also be vandal-proof.

A piece of art on the street is street urchin that has to outcompete the visual violence of advertising. Such works are left to their own devices because they cannot be constantly protected from the whims of a disgruntled public. By its very definition, street art is meant to belong in this environment. Again and again, street objects use a minimal toolset to keep drawing people’s attention. And if such works are destroyed, then they can easily be restored!

One of my best memories of Russia was a winter walk in Ekaterinburg with the artist Timofey Radya seven or eight years ago. He showed me street art in and around the city — works that he or his colleagues had created in a wide variety of places. I saw some impressive pieces: words, texts or images on the weathered concrete facades of abandoned buildings, on rickety wooden houses and on bare walls in courtyards hidden from the eyes of passers-by. This form of art in public spaces was completely new to me at the time.

When you discover a work of art on the street, it is always a big surprise. In a hectic everyday world dominated by loud words and images, you suddenly come across an object that astonishes you, which asks you to pause and look for a while longer.

A few years later, I made a similar excursion in Nizhny Novgorod, this time in the summer, intending to see even more such works. My guide was Timofey Radya’s colleague, Artyom Filatov. He took me to some abandoned places on the outskirts of the city. For some reason, you can’t find anywhere lonelier and more deserted than such places in Russia. Several of these desolate and godforsaken suburbs at once stirred an unmistakable feeling that it’s because of them that I am so fascinated with Russia. At the end of a long walk, having seen many amazing works of art, we came to the main boulevard of Nizhny Novgorod. There, I looked down at the tip of the “arrow”, where the Volga and Oka rivers meet. The vast expanse in front of me made me realize that Russia really begins only where Moscow ends — just as Italy begins south of Rome. I discovered this side of Russia only then — together with a new kind of art.

In several Russian cities, street art has developed in a unique way over the past ten years. It has grown into a movement in a variety of formats and sizes that has left graffiti far behind. Street art in Ekaterinburg and Nizhny Novgorod is an exciting urban phenomenon that has evoked competition between artists. I think you cannot find the kind of art that is developed here anywhere except in Russia. In a number of cities, artists are creating works in public spaces of such a high quality that it deserves a new term to denote it: “street art” does not hold up to the scale of this phenomenon.

Organizers of the Art Platform project introduced me to the works of someone who has been working on a project called Please Leave a Review (abbreviated as PLAR) since 2018. In order to remain anonymous, the artist took the name of the project in English as a pseudonym. This name refers to the guest books that lie in many museums and exhibition halls. Visitors are asked to write down what they found interesting or caused them irritation at the exhibition. The artist selects some of the reviews. Then, these short fragments (of no more than a few words) are stylised and put into the public space as art objects.

Choosing the place for a text is significant. Are there any places in the city where people are waiting to see such a work of art? Will they embrace the artist’s work gladly? It may be that art installations are prohibited there, or it takes too much effort to get official permission. In such cases, it is more convenient to work anonymously; in this way, no one is accountable, because no one knows who put it up. However, the artist may be asked to do a project for a certain location. In the event of such a commercial order, one should be able to find the artist. So, it would be unwise to maintain complete anonymity. Therefore, the artist chose PLAR as an intermediate option and can be reached through the website.

Unfortunately, in recent years I have not walked around Ekaterinburg and its environs. And the spectre that is haunting the world this year, unfortunately, prevented me from going there. Luckily, there are great pictures of the projects. You can find them on Instagram.

There, for example, we find a photo of a snowy landscape with a white building in the foreground. The text on its wall says: “Feeling of emptiness”. In the background we see several new buildings. They belong to a so-called microrayon, a new district with high-rise buildings, parking lots and shops. There are many of these neighbourhoods on the outskirts of large Russian cities. Often, these are the places where the city ends abruptly and the vast empty steppe begins. In one place, you see a high-density development, where thousands of people live, and immediately next to next to it, nothing at all. That’s what makes this text so suitable for this place. At the same time, it begs the question: what is this type of housing development a completion of?

This is how many works in this project originated: after seeing an exhibition, a visitor had a feeling of emptiness, and he mentioned it in the guestbook. Then the artist took these words, shaped them and relocated them somewhere else — as if by copy-paste. Someone’s personal experience gained in one place — where art is protected — has been transferred to another place, in a public space, where it brings a new experience to the viewer.

We can compare this principle with what Marcel Broodthaers did in 1974 in his work Les animaux de la ferme (The Animals of the Farm). Under the images of cows and bulls of different breeds, he wrote the names of various car brands. Thus, a dark brown bull — don’t ask me which breed — became a Cadillac. The ageold educational tradition of supplying a picture with the right word is broken. To loosely quote Magritte: “The pipe is not a pipe anymore”. In a similar way, a review from a museum guestbook is placed in a new environment. If it is done well, our imagination starts to work.

However beautiful all of the photos of these works on Instagram are, anyone, who has ever taken a walk like mine, knows that a photo cannot capture such a work of art in such a place. For a complete personal experience, you have to feel the moist cold and smell this abandoned place. Your gaze should wander over the crumbling, mossy wall, down which drops of water from the melting snow run. The change of light is essential: when the sun sets behind the clouds, the moment is filled with everything that is happening around you. And the piece of art works as a catalyst for that experience; it leads you to this place, for this, and there it sets your imagination in motion.

The phrasing from the reviews selected for the PLAR project often speaks of emptiness, monotony, and about the fact that there is little to see. These lines become the names of works: “Where there is emptiness, there is freedom of action”, “All this is strange, but let it be”, “There is simply nothing to look at”, “The exposition looks empty”. For those who regularly — anywhere in the world — attend contemporary art exhibitions, it is easy to imagine an exhibition that could elicit such responses. Everywhere, works of art are displayed in empty white halls, like a small dish of the “new cuisine” served.

It is a pity that in those open-air locations, where the works are placed, the visitor never has the opportunity to leave a review in turn. Later, these comments could become the source of a new text, which could then be put back in the same location. And so on. Could it be that the texts in such a series would each time become more and more suitable for the particular space? And, in the end, according to the laws of evolution, would they develop into the most successful text for a given place? I suppose not, but I would like to know if I am right. I think that the strange power of these works lies in the fact that the text is transferred from one context to a completely different one. It is the principle of a bull becoming a Cadillac.

In the project Please Leave a Review, there is a place for a similar revolution of text. After wandering around in this big, dangerous world, some of these texts end up back in exhibition halls. That is to say: the artist puts them there. Thus, in an exhibiton hall, we read on text boards: “Absolutely Unreasonable Waste of a Huge Space” and “More Staff Than Exhibits”. These are comments that sound very familiar to us art lovers.

Exhibited in this way, texts from the guestbook acquire the proper status of a work of art: they are immediately looked at as art, because they are exhibited in an art space. They hardly have to do anything for this. Moreover, the description has a description of its own — a phenomenon called recursion. This is interesting as an intellectual exercise, but not as a stimulus of the imagination. The bull returns to the stable of correct descriptions and roars: “A bull is a bull is a bull is a bull”.

“Sometimes It Works, Sometimes Not” is the name of one of PLAR’s work, executed in illuminated letters on the building of a museum of photography located on a busy street in Ekaterinburg. From time to time the word “Not” go out. So then, for a few seconds, it works. Sometimes. After that the three letters light up again, and it fails again. That’s brilliant! The text on this building reminds me of the photographs we take: sometimes they turn out well, sometimes they don’t. And it may well be a suitable motto for all my activities. But when I see the same text in a photo at the exhibition, it has less impact on me. There it “does not work”. Immediately, I have an irresistible urge to go and search for all texts that have escaped from the the art greenhouse. I wonder if they can survive in the wild.