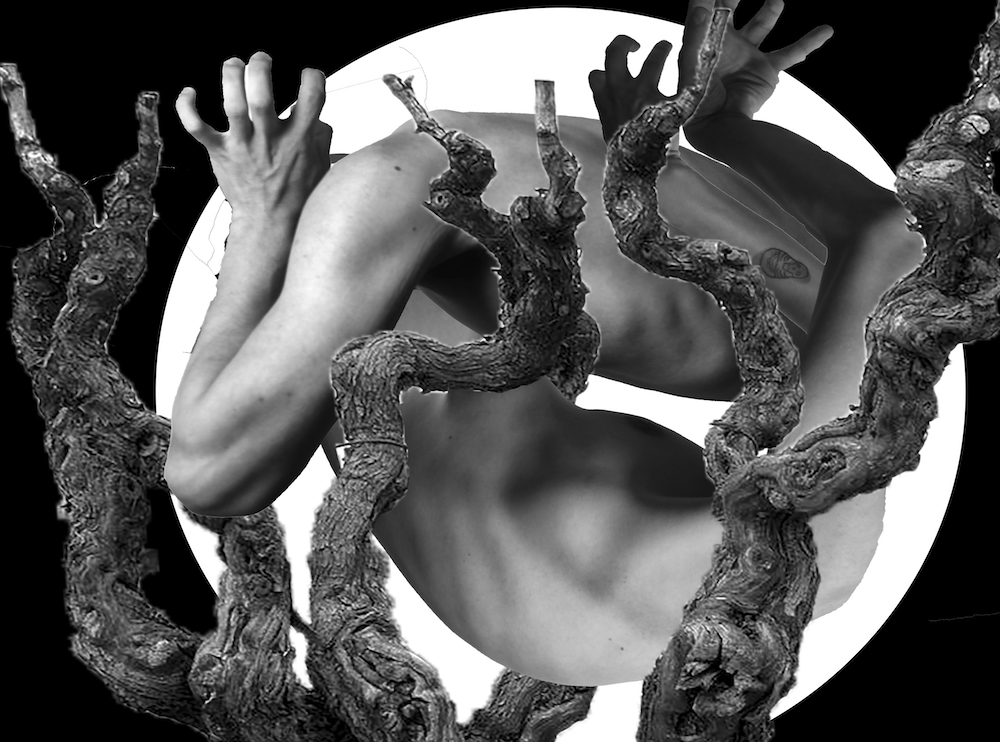 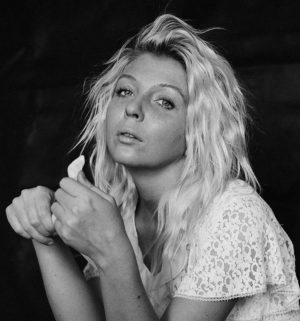 The work was done in the art-residence of the “Sinara Center”, France

The vineyards of the Prieuré Saint Jean de Bébian estate

Tree, moon and body are universal elements of mythological narrative. The artist Katya Poedinshchikova has created a symbolic image of a dual world that is both attractive and repulsive. She raised an archaic layer of transformation stories. Nature is in constant transition from one state to another – from terrible to attractive, from inhuman to human, from living to inanimate, from male to female, from sexual to mortal.

The world tree is an archetype from many myths. Katerina Poedinshchikova turned to the Dionysian symbol – the vine. She exposed the primordial darkness, the chthonic element, tamed by the rational order of the Apollonian civilization. Katerina speaks about the ecstasy of intoxication, about passion and art, about going beyond the limits of individuality, about the process of dissolution in the collective soul, about the nighttime fear of the pre-individual unconscious.

There is no place for the demonic and sinister in the new world created by Katerina Poedinshchikova. The terrible melts before our eyes, acquiring a new harmonious form. The artist complements the gothic gloom of a dry vine with the gold from the lunar Art Nouveau. The emotional tone of the piece is devoid of anxiety. The demonic transforms into magical, scary into strange, i.e. psychologically comfortable.

A dry vine can symbolize both primordial horror and freedom from the faceless order of modern times. However, in Katerina’s work we see a dried grape branch – prickly and uncomfortable, of graphite color, which gives the natural curve of branches an artificial touch, as if it is made out of metal. What is the meaning of this transformation? Could it be Odin hanging on the Yggdrasil, gazing into cosmic darkness in the search for eternal wisdom? Or is it the World Tree after the “death of the gods,” a tree that turns from the basis of the world order into a dead tentacle that squeezes a living body?

The time of action is the eternal timeless night, where the golden moon illuminates this tense body. The scene is a fantasy world, where any metamorphosis is possible. Katerina molds the boundaries of a mysterious other space, it is not the plot, but the material, from which this universe is made, that matters. Living material bends like a werewolf’s body at the moment of maximum muscle tension. Inanimate static matter hangs powerlessly, like a withered brush of a vine, a branch of a layered and thorny tree.

The chain of associations continues Ovid’s “Metamorphoses” or Kafka’s “Transformation”. The human merges with a natural object as a sign that man and nature are inseparable before a violent invasion, man’s enslavement by an alien element. The nymph Daphne, fleeing from the god Apollo, turns into a tree. To escape from divine violence, one must slip into nature. However, this salvation bears the horror of literal bodily imagery of such a transformation. “A frisky leg before becomes a slow root”, arms sprout with branches. All this, finally, makes us think of Dante’s seventh circle of hell, where the souls of suicides, turned into trees, ooze words along with blood. Body horror, the oldest genre of the human imagery becomes relevant for a contemporary artist.

Katerina does not engage in profound conversations with the audience. Her works are aimed at the modern viewer, who catches new impressions in an endless stream of images, a collector of positive emotions.

In the conditions of modern glossy culture, the aesthetics of the piece mutates into the Hollywood horror and reminds of the “Alien” universe created by Giger. The main antagonist – the crown of evolution, an alien organism with an exoskeleton resembling a withered vine – inspires both fear and admiration for eerie harmony. The existence of Alien is possible in the process of constant rebirth: egg – facehugger – embryo – xenomorph. His image combined violence and sexuality. The same in the work of Katerina Poedinshchikova: the terrible develops, transforms into a completed form. Gothic horror gives way to visual pleasure. The peculiarity of the artist’s pictorial approach can be interpreted as a rejection of narrative, she appeals to sensations. Making the nude aesthetic and preserving its brutal sexuality refers to glamorous media content.