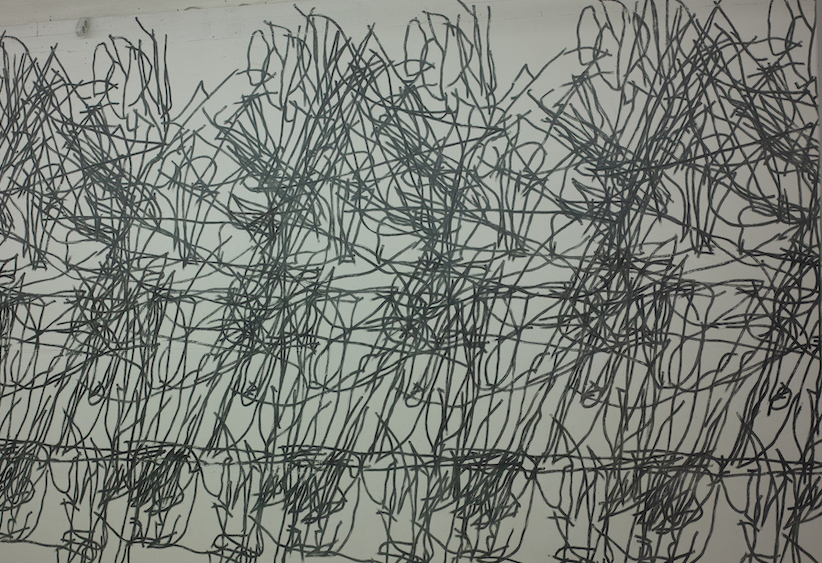 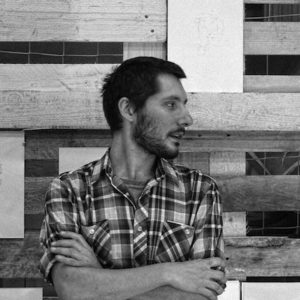 Apparition is a phenomenon, it is something impossible, this term defines Ilya Grishaev’s art. It seems to appear on its own, without his involvement, it is not drawn, cut or created. Although, Ilya Grishaev prefers to make art directly by hand. The effect of apparition is achieved with painstaking labor: thin, almost indistinguishable shading on paper sheets and detailing of monumental paintings on walls.

The art of Ilya Grishaev is a mystery. The keys to it are everywhere, find them – and you will discover everything. Albeit, each key is a new challenge, thus a viewer opens up an endless Russian nesting doll (matryoshka) with questions. As a result, everything boils down to an eternal dilemma: what comes first – form or content, material or idea? The artist does not give an answer, he raises the question. By the way of thinking, Ilya Grishaev inherits the traditions of Russian medieval philosophizing that existed within the framework of religious art. His works are a symbiosis of form and content that flow into each other and have no boundaries. Here everything is media and everything is a goal.

Ilya Grishaev works with the simplest expressive means: random lines and geometric shapes. By using them he assembles complex graphic structures on the plane of paper and walls. They also appear in works that cannot be called full-fledged sculptures, rather, drawings that have received volume. In his abstract experiments, the artist works with signs that are instantly recognized by people. Ilya arranges them inside a room or marks city surfaces playing with the recognizability of form. Viewers are not always aware of the moment of recognition, but they always feel it – and get involved in the game. It works because Ilya Grishaev managed to develop a distinguishable abstract style. It is characterized by the parsimony of means: constant monochrome palette, linear and geometric forms. Another distinctive feature is repetitiveness. A sign repeated many times turns into a pattern, but the repetitions are not literal, the motive develops creating a complex abstract score.

If it is possible to formulate what Ilya Grishaev’s art is about, then it is about language and its mechanics. The artist does not deconstruct language, he builds it. As if Ilya wants to live through the millennia of the language system formation. When he comes to the border between language and speech, abstractness and objectivity, he rolls back and starts over. His art is a semantic web, archaic sign constructions enclosed in themselves. Sometimes, already fully developed letters and words appear next to the black-and-white graphic signs of this proto-language. They do not translate from the graphic to human language, but rather indicate that they belong to linguistic units.

Musical experiments (individual practice and collective project “lily” (|||||||||| 9 |)) become another refraction of the same topic. Imagine a score that we can’t read. You can either play it as you like, or just take it as graphics. Ilya Grishaev with his group does both. They play according to the signs and sketches they have just drawn, as if from a score, and everyone is free to translate the visual into sound in the way they want. As a result, there appears a unique graphic document of the played music, which will never be repeated.

At the first glance, it seems that Grishaev’s abstract patterns and his project «Сhasklip» are entirely different. However, after delving into it, you may see that «Сhasklip» is not just a pop-cultural entertainment of an artist who is tired of monochrome graphics, but another approach to the same issue of linguistic functioning. In «Сhasklip» Ilya operates not with proto-linguistic structures, but with elements of visual mass culture. Viewers are presented with a set of videos and audio tracks, along with instructions on how to “read” them. Though the instruction itself turns out to be a riddle. This riddle is the essence of everything. There is no truth behind it, the riddle is the answer, the process is the result. It appears that Ilya Grishaev’s works in all their complexity are surprisingly empty. This emptiness requires a tense conversation before being discovered. It is difficult to resist the temptation to fill this gap, to invent and attribute something that does not exist.

The art of Ilya Grishaev is a solution to the problem: how to make one work all your life and never repeat yourself. This tautology is not only external, in endless repetitions of black and white lines in his paintings, but also internal. You need to strain your eyes to see that the ornament is always slightly transformed. Just as you do not immediately understand that no matter how the shell changes, the work always remains unchanged. Will Ilya be able to redesign his art further, staying true to himself, but not falling into stagnation and self-repetition?