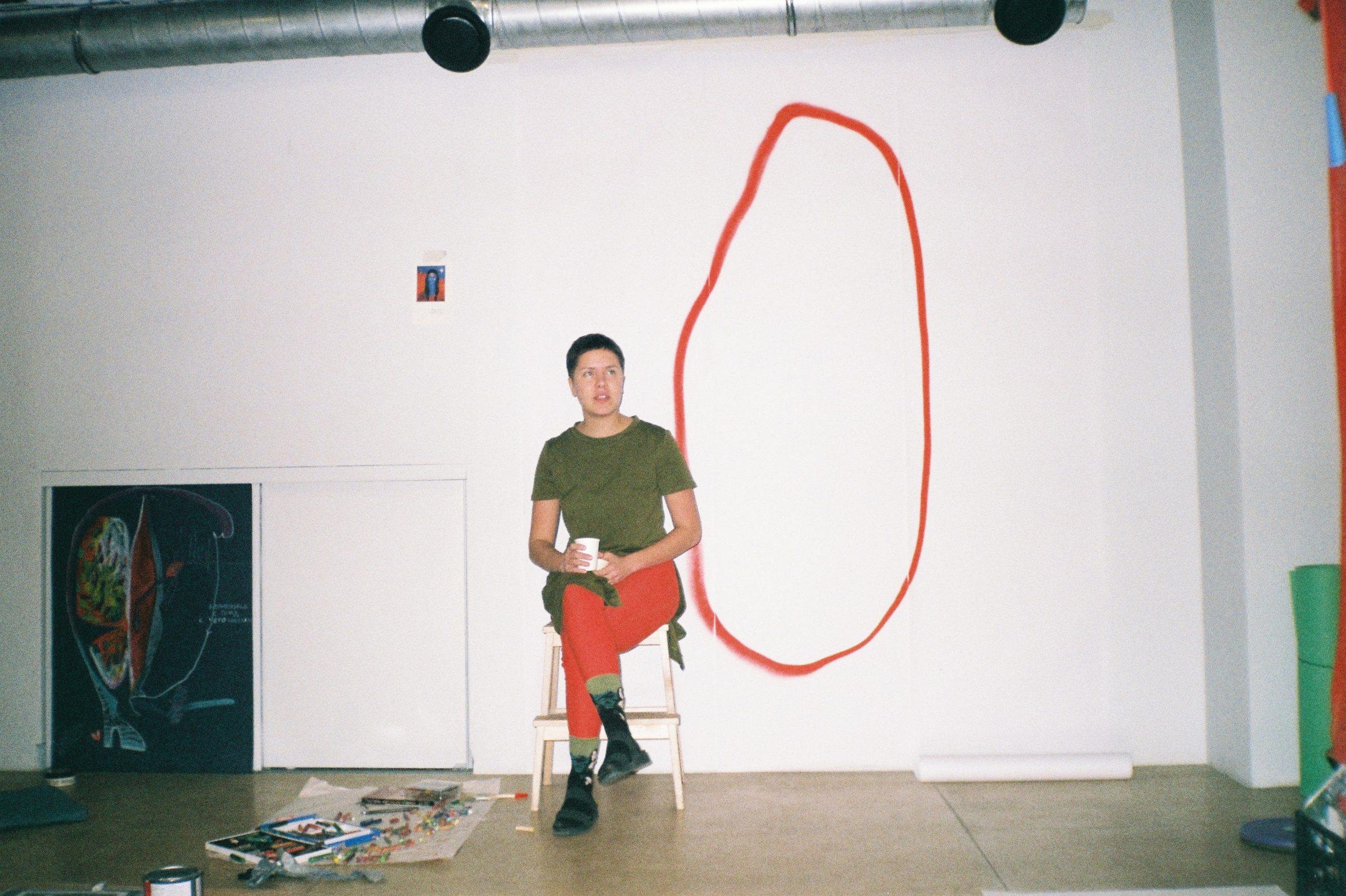 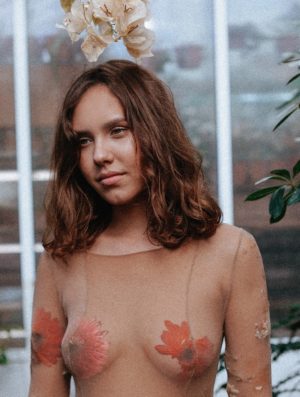 Does the society need what I am going to share? Every time I start writing a text, I worry that it matters only to me, that I myself am the most attentive reader of my texts. Should I blame myself for writing texts for myself? I dreamed for a long time that one day the addressee of my letters would appear; I tried and searched – I found, but I understood that the contact I sought was missing. And the question is not the one, which I intended the answer.

– an artist from Perm,

A plywood object is lost in the gray tree branches. Thin, dying trunks drowned in the “silver” of the industrial city. The object in the shape of the letter “Я” (I) is a result of excruciating chills from trying to answer a question about her activities. Does it matter if the question is followed by a truthful answer, which changes its direction every day? In the end, an answer to the question is only important when applying for a job, the rest is just an attempt to establish contact through interest. It is better to answer that I am an artist. It’s a definition, implying multiple processes.

In a podcast I heard a phrase: “You cannot decipher your identity without knowing your family history”. A short thought horrified me, because the first five years of my life are almost not documented by family photos. Sometimes I recall a story, share it with my mother, but she doesn’t believe me.

To give yourself a clear answer means to deal with childhood memories. In the action “10 years later” Lena reconstructs memories by repeating the rituals of that time. As a child, she sat on the fence and waved to the passing trains, that seemed quite a serious activity. For the “Geopoetry” exhibition at the Perm Museum of Modern Art (PERMM) Lena made the installation “The Thirtieth” out of tulle, plastic fittings and dead bees. Lena spent her entire childhood at the dacha thirty kilometers away from Perm.

Leave the city, move thirty kilometers away, move your body out of the urban context into a friendlier utopia of a summer cottage. In the city, Lena’s actions are considered interventions, invasions into the urban environment: from the “Support” action, in which Lena, supported by cables, jumps out of the window in protest against the PERMM museum’s move from the River Station, to the “Reset” – a dramatic disposal of long canvases with colored viscous lines. The confrontation between the artist and the city reaches its peak. Putting all illusions aside, Lena, directly responds to the city’s indifference to her art.

I look at the documentation of the ‘Reset” action and for some reason I have fragmented feelings. I return to the main question – why am I doing this and not that, and does society need my “this”? Is there a balance between socially oriented action and internal intention that often dissociates with social demands? The answer’s value will dissolve in the contrived and seemingly useful words.

From external reality turn to “cultivating your own garden.” From the “Reset” of art to the “Pleasant Room” – Lena’s personal exhibition at the Center for Urban Culture in Perm. For two weeks she made out of the workshop in the Urban Culture Centre a hospitable room for everybody. Lena was dressed in a home gown, made tea and mentioned that she had brought some leaves of a fragrant herb from the dacha. The war is over, and now Lena marks her coordinates on the city map.

Lena opens “Massage at Rembo’s”, she heals with massage. It is necessary to put body in order, and then a person’s harmony will be set, his flickering light will be attuned to the endless external worlds. Body practices come up: Eyebrow massage, Collective touch, Paradise within you, Femino enso. To believe in what is happening, I sometimes pinch my wrist and ensure that something is really happening in front of me.

Attention to the human body does not sidetrack perception. Hands in the photographs “Working body”, by which you can determine how many hours I had to work, become evidence of my reality. In the video “Will” Lena slowly goes into the ice-hole, stumbling and not daring, in the end she is under water and then quickly jumps out, stands on the platform near the snow. This is where the observation of the body begins. Lena stands straight, as if she has triumphed over the pressure of external conditions. However, later her body twists and resists being in the cold, Lena tries to be separated and stand in the fire of frost bullets.

Art in this form becomes a part of everyday life, it fights the preset and predetermined. A new way to resist and an opportunity to believe in the reality of existence emerges.

and there is no more need to serve society after all,

the outside world is someone’s implemented utopia

writing and art are necessary for me and people around

to abandon the one-way interaction model

in favor of the collective