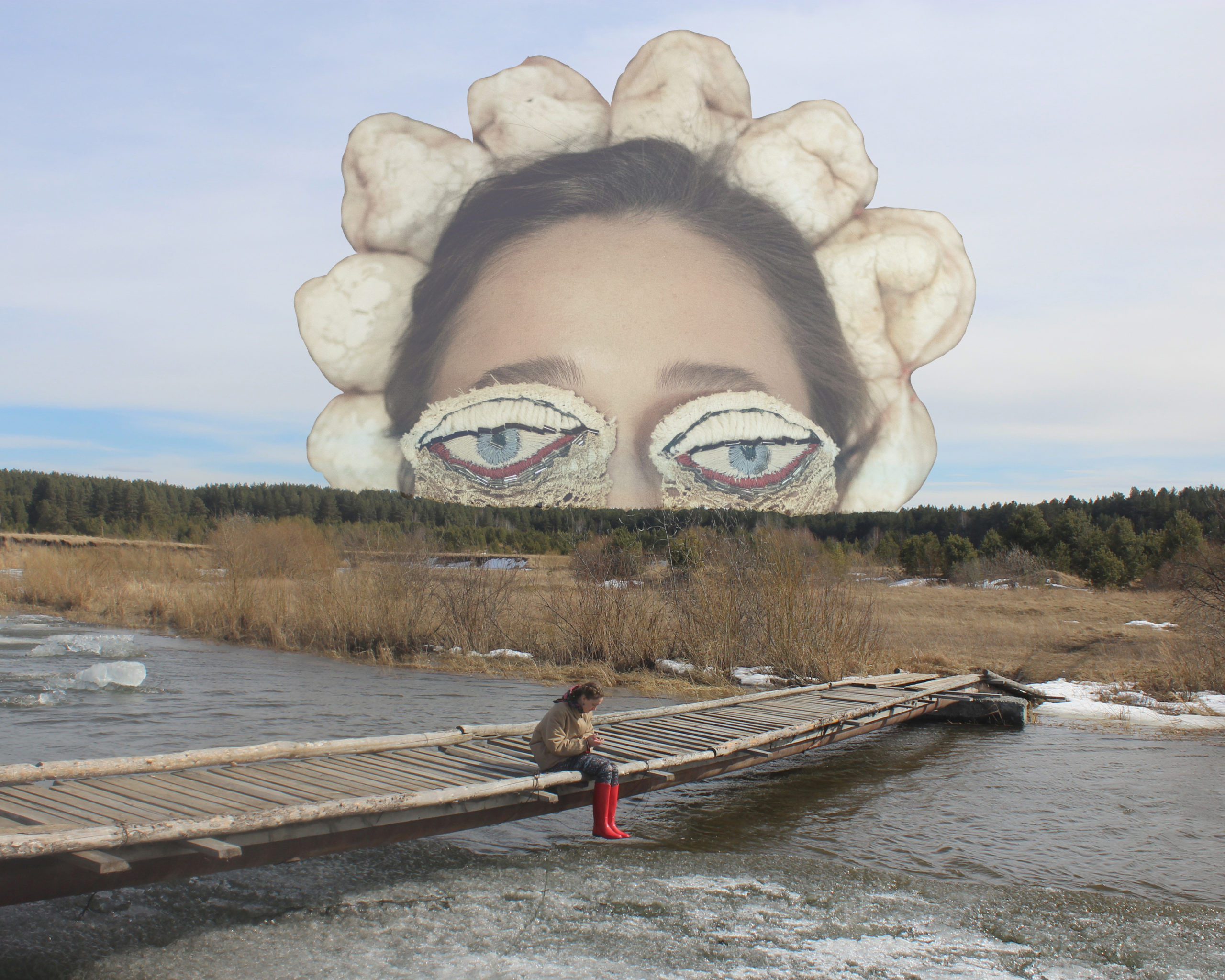 Organizing utterances on a page, what I am doing now and what Irina Kotyurgina will join later and put effort into making the text fill a small and cleverly folded leaflet, – it is a weak attempt to cut a fragment out of reality and describe it; it is maneuvering between idiosyncratic judgments, vaguely shaped ideas and authoritative statements that appear on the surface of consciousness.

This piece of description is separate both from the edition as such (feel free to detach these sheets and stay with Alisa’s works one-on-one) and from the works of Alisa. Anyway, she presents her working process in the following way: “In general, I often force myself to do such things that I wouldn’t usually do and then on purpose I show it to people in order to feel more free, in order to remove all borders within myself.” Alisa strives to a holistic presentation of herself and her work. Here she is fundamentally at odds with the habitual perspective that in social interactions we try on social masks and reduce our personality, that only the part of a personality, which is “created by stylization and reservations”, comes to the fore.

Alisa persistently does not distinguish between herself and her work. Her own body becomes the guarantor of nondifferentiation, an expression of equivalence – it is the way of presenting works and oneself, all together, undivided. What is generated by imagination or consciousness gets out into the world, divides during the production process, but all the same hands that embody the plot then put objects on Alisa herself: whether it is a mask that hides her face or glasses that resemble old lady’s eyes. The artist is not separate from her work, because she always reveals herself in it.

More precisely, you can try to cut and separate. The attempt is taking place right now: I am trying to cut and separate by trying to finish this text. I will only indicate for the second and last time that the inseparability of Alisa’s practice with her person, with her life in time and space, is under threat each time when someone sits at a distance trying to write a text about her.

«I need no environment, nothing»

Environment regulates expression of emotions and body practices, bans or encourages a variety of actions: from yawning with an open mouth to a triumphal march of soldiers. An artist, who intentionally disfigures her body or hides behind objects that deform it and turn into an alien, albeit anthropomorphic subject, whose intentions are obscure, such artist can be appreciated as a brave pioneer who seeks to reveal herself to others and thereby introduce a social norm bearer to deviations. If you view it from such a perspective that the subject intentionally ignores the environment, then the following speculative statement can be true: the artist gradually occupies the environment by acting plastically and continuously like a virus, infection or a strange alien substance, which was popularly described in old-fashioned comic strip: it recodes the objects that before colliding with him/her, used to be the objects of exchange, embedded in certain social relations and deprives it of usefulness and “humanity” by denying its telesis possibilities, the influence on social relations or phenomena by means of objects.

Erving Hoffman gave a detailed description of the first point in his piece “Stigma”: “The term stigma will be used to indicate a quality that reveals some shameful property of an individual; <…> it presupposes not all undesirable features, but only those that do not correspond to our stereotypes about what this type of individual should be.”. He carefully examines different modes of behavior: for example, the behavior of keepers in the St. Elizabeth’s Hospital, who label patients as “stigmatized”, thus depriving the latter of the right to be among equals and deserve “human” treatment. In a more vivid and extreme form, this “irregularity” is reflected in carnival, monster circus, farce shows, which were innumerable in the 19th century: Ray Bradbury addresses it in “Something wicked this way comes” by describing a terrible person, on whose sinewy body prison tattoos travel and move fighting with each other – this man, of course, travels with a terrible circus.

Some masks and costumes created by Alisa put their heroine (that is Alisa herself) in the interworld: this creature has some human features; the eyes remain where they should be, the mouth does not move to the place of the diaphragm and humbly hovers over the chin.

These works fade without a bearer, and produce a greater effect with the photographs that Alisa often uses. If you trust Siegfried Kracauer, photo “collects fragments around nothing”, – it does not exist on a marked timeline, and for that reason presents monstrosity as something timeless and given here, now and always. As Jean-Jacques Courtine says, referring to the history of cinema, “injuries and monstrosity are no longer irreversible.”. Monsters become normal and normalize ideas about those who are utterly different; or, if we turn once more to Courtine, “in this regard the abnormal body has become an object of a large-scale corrective movement.”. Monsters manifest themselves, dissolve in time, hide in Alisa’s closet and at the same time stay in photos, appear in recommended and advertising posts that Instagram shows to different people who have ever admitted to a social network that they are in love with contemporary art.

Every contact with work is an introduction to a controlled fear; creatures through which Alisa emerges can be alarming – but they, their manifestations are controlled by the creator. “Of course, this is not always possible, but I try to take maximum control over all the moments in which the audience sees my work or me. <…> Instagram is very helpful in this sense because there everyone can see as it is. Well, at least I try to make it that way. There you can see the usual everyday situations from life, which I think are very important. I want people to see: I am a real human being and my work is a logical confluence of certain moments in my existence.” Alisa indicates her “distinguishability” and interacts with those who watch and react; but at the same time – part of her work exists beyond the conventional recognition of those who are able to watch. And here I turn to the second stated option – expansive physicality.

«All that was inside»

The first, de-stigmatizing variant was described in a sociologising style; it allowed another viewers’ presence and was utterly remote from the artist’s position. The variant, which presupposes the spread of Alisa’s influence, shifts the “enchantment” of objects to a psychological level. These designations are conventional; there is no strict science behind them, but nevertheless, the positions differ. The proposed expansiveness is similar to the way John Ashbery viewed things:

Everything, from eating watermelon or going to the bathroom

or just standing on a subway platform, lost in thought

for a few minutes, or worrying about rain forests,

would be affected, or more precisely, inflected

by my new attitude.  I wouldn’t be preachy,

or worry about children and old people, except

in the general way prescribed by our clockwork universe.

Instead I’d sort of let things be what they are

while injecting them with the serum of the new moral climate

I thought I’d stumbled into….

It is not the body that is extended, but the relation to the world that is produced by consciousness, that never leaves the premises of the body, but rather, manifests itself on it. Alisa refers to this when she says: “All that is needed for work is myself, and until I exist, I make, that’s all. <…> It is also very important that I do not perceive my works as some kind of alien creatures, characters, etc., it’s all either me or my portrait in different forms. It is not something separated, it is a part of me. It’s all that was inside, but was visualized outside.” The materials that Alisa drags into her work – textiles, yarn, clay, decorative beads, chipboard – lose direct functionality and redefine the space in which they are placed; a space which holds only Alisa’s character, and other people are denied entry there. As soon as Alisa puts away or hands costumes over to the exhibition, – without supporting photographs, – the work “turns off”. It’s just a dress, a mask, a brooch, which only shows that it was created. They are already driven out of the social relations world, but at the same time they are no longer attached to the world that Alisa creates. This attachment of things to her is especially vividly manifested in the series of works exhibited in the project “Everything is not what it seems.”. Her character (or herself) captures the pastoral, which all the romantic heroes of rural scenes left in horror – only Alisa stayed. She denotes her right to own the space, which she has redefined or, rather, has twisted by her own look. Only physical boundaries inherent to the working space prevent total capture — studio-apartments are not designed for monumental research: “I also have a problem with scale, I wish to make big things, and I make it occasionally, but I can’t do this more often, because I have nowhere to store works. The apartment will soon burst, the walls can no longer hold all my works.” The artist puts herself into the space that she has fully designed, expels others from it – the rest are allowed only to watch, peer, send direct messages, but enjoy no right of other interactions. Thus until Alisa exists, therefore she makes.