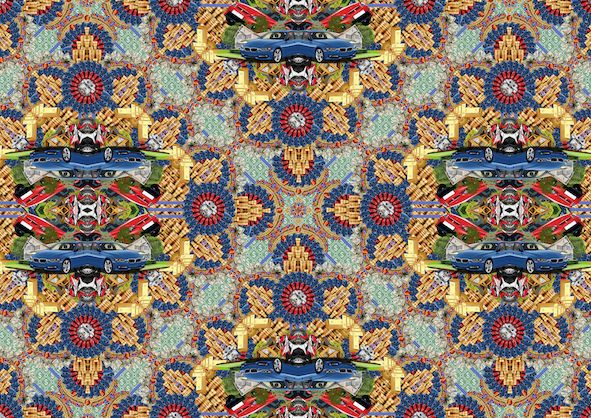 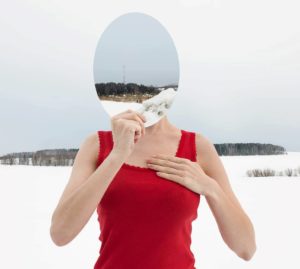 The joy of recognizing

Long journey, especially in solitude, produces a curious effect: people start to seem familiar. You recognize something in strangers, find understandable features in unfamiliar figures and something native, domestic in alien phenomena. Biologists say it is explained with a peculiar idea of economy that our brain has: why process new images if it has quite suitable old ones. Psychologists interpret it as a mechanism for alleviating anxiety before the new and unknown. Everyone persists that in fact it doesn’t exist in nature. After all, it is enough to come closer and discover that a figure is a stranger, and the phenomenon is unfamiliar. It is good that the artist is allowed to touch upon the nonexisting – and thereby express it. Or even “appear it” if the verb “appear” could be transitive.

For the artist Lyudmila Kalinichenko all coincidences are nonrandom. Opposites meet in her projects: virtual and real, ancient and modern, original and copied, unique and ubiquitous. Moreover, sometimes they turn out to be the same. Mystery and everyday life, one and zero, copy and paste – only at the first glance they seem opposite, but in fact they cannot do without each other.

The joy of recognizing can be blinding sometimes, so any speculations are carefully planned in this text, albeit the plausibility is completely random. The very use of words describing her work brings pleasure. It seems that you were also thinking about something like this on the periphery of your mind. However, it is precisely the artistic form that Lyuda chooses for her projects that accumulates the entire mosaic of topics important for her and for you.

In search for a double

The Ural artist Lyudmila Kalinichenko traces back her own mythology from the roots: from grandfather’s cameras and developers, from spells and divinations of her grandmother who was a witch, from her own childish, almost intuitive interest in strange objects and repeating decorative patterns. Hence, she has such an admiration for the mystical and inexplicable – in what people tend to see special signs and signals from the universe. It nurtures the artist’s creative idea. Whiles her modern life in a big city offers the tooling: Lyudmila works with photostocks, does photography and web design.

She is – the author and the character. As a researcher, she makes herself the subject and the method of her study. In artistic practices Kalinichenko repeats life experiences. As she feels a mystical connection with her missing double, she searches and finds repetitions, duplicates and rhymes in the surrounding world. As an heir of a witch she rewrites reality with her actions.

All Lyuda’s works can be interpreted at several levels. They are like rebuses: it is enough to get a key (for example, from an explication) – and the answers will begin to fall in. They will not only correspond with each other, but also with daily practices of a modern person. It seems that if you guess all rebuses, then eventually the main equation will be solved: what is a person in this era?

Neither technical progress nor virtual reality abolish attachment to idols, which is so humane and comprehensible. They say that physicist Niels Bohr hung a horseshoe at the door of his house because it brings happiness even to those who do not believe in it. A person includes all previous experience in what he does. Humanity inevitably copies features of previous discoveries and social structures into new mechanisms. In the artistic world of Lyudmila Kalinichenko, new technologies do not take a person away from the roots of civilization, but, on the contrary, help to understand them better. Sometimes literally: for example, in the installation “Bottom” a camera for underwater shooting helps a viewer to see the past of the city resting on the bottom of the river. It is conveyed through the experience of camera, and not through personal sensations, and, like any other myth, relies on unconditional faith in it.

The less comprehensible is the phenomenon, the easier and nicer it is to believe in. Few people truly understand how does the Internet work, and the mind is unable to realize the scale of the network that has grown before our eyes. It is only left to believe in its omnipotence and keep asking the search box questions one after the other and enjoy learning something new. It became utterly literal in the “Kumirnya” project made for the exhibition “Everything is not what it seems” (2018, as part of the “Bazhov-Fest” in Yekaterinburg). In the yard of the Ural branch of the NCCA, Lyuda erected a wooden idol, to which our ancestors addressed many centuries ago, – the common Ural ancestor. The first to come to mind is the association with the Shigirsky idol, the most valuable archaeological discovery in the Urals. Albeit in Lyuda’s version, it subtly reminds the sign of the network connection bar. Kumirnya really “shares” Internet connection: any smartphone user can connect to the Kumirnya local network and get answers to important questions from the ancestor. This gesture encompasses the most ancient beliefs, the accidental discovery of truth through fortunetelling with a book and an almost pagan belief in the credibility of everything written on the Internet.

Once the Internet was on a par with artificial intelligence and aspirations for bright future. Now it has lost exciting novelty and stuck in man’s life somewhere between a toothbrush and a business lunch. In oral speech we mention hashtags and quote memes, in paper editions we try to include a search on the page, and cancel a failure at the kitchen using Ctrl+z combination. Lyudmila Kalinichenko documents this routine in the project “500 meters online.” With her straightforwardness, she connects the online and the offline through waste – the most eloquent trace of human life: every day for a year she photographed the leftovers from a meal eaten while surfing the web.

On the surface, there lies the association of garbage with the quality of pastime on the Internet. If such social criticism is applicable to the post-Internet, then Lyudmila takes a step towards the “post-post-Internet” (as she calls it). Following the artist viewers won’t even feel how they cross the line between the online and the offline. It is so easy that it is high time to doubt whether this border exists at all. She is ironic that this way lies through the stomach. Garbage is a purely physical phenomenon, photos of it are digital, photo prints are again physical, placing 500-meter feed with photos online is again a digital action, but putting it in nature is physical.

And where is a human in this wander? It is relevant to quote Lyudmila here:

It turns out that naturally the binary code is the basis of everything. The “Binary Code” project clearly refers to Adam and Eve, only these names are too strong cultural symbols to speak about them directly. Zeroes and ones multiply rapidly – self-replicating and self-copying. They seem to be the same, but small changes occur during the copy process. The more rearrangements and combinations happen in copying, the more striking the differences will be. As a result, each copy is different, it is individual.

Kalinichenko views this topic from different perspectives. Sometimes she needs to build a whole “Room of Desires” to illustrate that all happy families are alike. This installation was created for the main project of the Ural Industrial Biennale in 2017 (curated by Joao Ribas) as a place of power, where a ritual and an artistic technique mixed and became homogeneous. Just like in shamanic practices, when the rite was both an act and an important ritual. The starting point for the project were the desire maps, which are used to visualize the preferred future. For the pattern, the artist took photographs from the Top 5, which people around the world most often put in their desire cards following simple rules. Each image is an emblem of values ​​that are important for all people together and for each person individually. From afar, it is a universal, impersonal picture of an ideal home, family, or leisure, and after looking closely these appear the innermost aspirations of individuals with their own history.

In mass culture, including the Internet, advertisements for mayonnaise provide the ideal visuals of eternal values: a vibrant, healthy, classic family, in a sterile house, at a table. In fact, this is a vulgar cliché, but we are so used to seeing it now that we are resistant to such visuals. Moreover, we accepted it as an example of a preferred future for ourselves.

The artist works in a different system of axes, beyond complacency or contemptuous snobbery about copying. In this work, she repeatedly copies widespread flawless and edited images from online image stocks and abstains from judgment. Strange, but due to copying she emphasizes that personal perception of these images is unique. It is at the exhibition that the viewers smile with irony, but at home, they will draw the maps of desire on their own. To convince visitors that her intentions are serious, she puts a magic crystal in the center of compositions. Make a wish, do not hesitate.

Imagine that two important discoveries were made simultaneously in different places. For example, Popov invented the telephone, and Bell did too. Or two different nations created two fairy tales at the same time. Or the same business idea came to two people who did not know each other. How to establish what is the original and what is a copy? Who will get the laurels, and who will remain the second forever?

Perhaps we all were on the clipboard while they were inventing “copy” and “paste” mechanism. Lyuda tries it with herself: in the majority of her photo projects, she is her own character. In “Household Surrealism” she uses photography to transform reality, in the “Zebra” series she explores how little a person needs (well, well, a zebra) to feel that he or she belongs to this world, and in “Anti-Utopia” she studies how an artist impacts the world.

The aesthetics of her photos evolved from photo stocks; utterly glossy, with smooth surfaces and bright, synthetic colors. Ironic flirting with kitsch is, of course, not an invention, but Lyuda doesn’t pursue it as a goal either. In fact, it is late to be ironic: it’s already our reality, and thus it’s more interesting to see where it might lead.

As a result, the uniqueness of an individual and his replicability meet in self-copying. Besides, self-copying emphasizes how self-centered a person and the world are.

Lyudmila Kalinichenko has been engaged in art since 2013, and over the past five years has developed her own artistic manner and her belief that an artist can redesign reality with actions. She works with many comprehensive topics and has elaborate means to speak about them. Discovering the world, a person repeats all stages of civilization development, from primitive beliefs to postmodern games. It is good when this joy of recognizing entails something else besides the usual wordplay.

* From the “Binary Code” project by Lyudmila Kalinichenko and Kseniya Larina