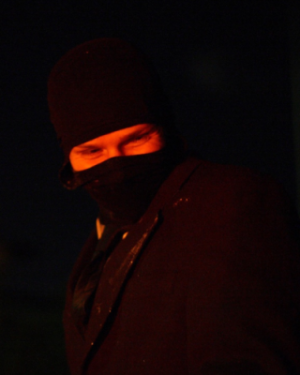 Artist
Tima Radya
Tima Radya
Tin, aluminum – laugh in gusts, grid is in a flurry from every waft, in the heat of unsolved passion it waits for nonchalance, and gets a strive to surrender to the wind in a blow of a slanting rain.

In an outraged city walls scatter, awkward words of street confessions crumble into a thousand ants. City does not accept you and opens yards and arches wide before your eyes. A beggar who goes through his belongings under the bridge is less vulnerable than a confident man who is not ready to make a move without a cup of proper coffee. This city spits into the face of any passerby, calls anyone a stranger who refuses to fall in love with it at first sight.

The city is packed with layers of alien presences. Testimonies of love sink at the first thought of flood, and marks on the stone walls of rivers tell about past losses. The layers of moss and silt, dust, lime and paint – like rings of trees – count years, then centuries. Indifferent glances glide over faces, over housefronts – these multi-eyed monsters, who silently hallo windows that are smooth and clean, broken and dirty, instinctively glaring, but missing curious gazes.

There is life behind the windows. Cheap curtains, expensive drapes smelling of dust, blinds, unthinkably fanciful window grates. Wooden shutters – closed or broke open to meet neighbors and their gossip, or, perhaps, Protestant rectangularly evened and polished glasses – in their transparent nudity ready for any prattle. Even if they have nothing to hide, they guard. Guard the private, to which everyone is entitled; that something, for which all sorts of new bourgeois are taught: when turning on the light – draw the curtains.

Draw the curtains and behind indifferent mirrors of skyscrapers it would be a meaningless gesture, puritan in its consistency, in its urge to protect the innermost, something that, supposedly, the other’s eyes do not dare to claim. Shut the blinds and in burning hot wells of stale courtyards this will be a challenge to public taste, the scrape of a latch will break the rhythm of dominoes rattle, backgammon will freeze in a semi-waltz.

The broken rhythm covers up with goffered metal of fast and unreliable, wind-resistant fences. Tin, aluminum – laugh in gusts, grid is in a flurry from every waft, in the heat of unsolved passion it waits for nonchalance, and gets a strive to surrender to the wind in a blow of a slanting rain. Fence cells, wooden sidewalks, safety tunnels, support for unreliable bridges protect the bright future of ambitious construction sights. As if the opacity of the temporal constructions can hide what is there – on the other side of the coin.

As if the reverseness itself denies the right to distinguish, makes disguise impossible. Native and foreign mix in the intentionally indifferent glances of the city. Underground passages, narrow streets of aimlessly tall buildings, the rhythm of squeaking escalators, the suffocating smell of backstreets – they all say: you have no right to hide. And if you had one, how could you? With a laugh of sudden, but such legitimate flashers blatant intimacy erupts: “The brighter light is, the lesser one sees.”

I can see you. The rooftops are insecure screens, behind which love mixes with the suffocating smoke of despair. Under multistory ceilings once bold feelings year after year become covered with sticky mud. Antennas like measuring spoons scoop a dose of the city sky, the sky on which there are no stars visible from the lights, which from the depths of the smoked city seems tame and accessible, which turns into a solid sphere – just as temporary in its manmade nature as the person oneself.

Refusing to appear reckless, the sky goes beyond the city borders – and the pure blue of the ancient cathedrals connects with the multi-ton whiteness of the clouds, spreads with implacable gold at sunset and, having lost the sun, covers its edges and borders with purple shade. It gets dark. In thick blackness flawless stars are highlighted. Looking at this, for the hundredth time you repeat what everyone may know: “brighter than us”.

What can we do against the sky? It is ridiculous to think that it needs our “pros”. Too much beyond does not exist until it is named, even more disappears in you as soon as it gets an (honest) name. But the sky does not need its name in order to be or not to be. “SKY”, expressed in the name, is necessary only for arrogant people, to those, who are too round-shouldered to raise their heads to the sun and too haughty to know their place (under the sun).

Any superfluous word will be a slap in the face, an exhausted means to bring to life. Words are appropriate where you need to realize the scale: human, too human, grin with a sarcastic smile of simple nominalism. The words that sprout in memory and in texts prolong a person, multiply his presence, make him not that temporal as he actually has to be. Perhaps, words are the most long-term enterprise of a person. They can outlast cities.

Words last longer than the most winding city route, any city is superior to man, though not always devouring. Only by means of words can a person align their relationship with the city. Only with the help of words can he establish a balance, distribute reciprocal measures, and even make the mutual harsh businesslike attitude, the nonreciprocal hazy-ghostly flaneurship and all-consuming hustle and bustle erupt into a sublime, tragic memory.

«If only I could embrace you, but I’m a mere text», – words worth reading against the sky.

When meeting a place words breed senses, polish their edges, grind away their ribs – by the stairs of the roof, by rough slopes, by electrodes and scattering sparks of welding, by the freezing spray of glue, by the spilling cans of paint. Words are imbued with inner tension, after becoming the hardest ice it gets broken into millions of pieces, which anchor in the hearts of passersby with fragments of the magic mirror.

The idea grows into a place, and they both work as a whole, as an endless urge to be recognized. A place – is like an armor for an idea – defines its contours and defends from the attacks of the outside world. The idea is hardly afraid of the place, it clings to it, once found, but tries not to get burnt by this rapid intimacy. Obviously, they build their world for the outsiders, but, left alone, shout to each other: “Hey you, love me.”

The power emerges where it is forbidden, where the unspoken restriction is itching with prohibition, where the line between “never” and “now it is possible” is so subtle that you notice it only after having crossed. Willingly or unwillingly, you push the border and beyond it meaningless reproaches become a piercing injection of conscience or insight. Beyond there is no place for idle talk (neither 24/7 nor by a special schedule), beyond it new knowledge is possible, and perhaps, it is worth keeping silent about it.

The power penetrates the domain of new knowledge, and it grows in the vicinity of the cognized world. By means of numerous grey high-rises, with the rings of protected nature areas or unpleasant stalagmites in the center – but it sneaks into the holy core of our mind: to the city inhabited and comfortable. Having broken the protective shell of our comfort zone, this knowledge is capable of disrupting the order of aligned parks with its young roots, that were organized in the head of everyone who cherishes moral choice.

In the endless walks in the given squares, we sometimes rejoice in the verified lighting, sometimes we admire the marvelous park sculpture, but often we stumble over construction sights. Not every landscape design withstands the upheavals of a modest conscience. A gauntlet thrown down or a raised red rag provoke different actions: someone puts tiles, someone mows lawns, and someone forgets a path to this park forever.

Apart from parks, there are garden squares, embankments, squares with fountains, gardens, little gardens, courtyards – somewhere the paths go no matter what alright, but somewhere they diverge, driving crazy everyone who wants to know exact answers to the questions like: “What are we? Where do we come from? Where are we going?” The very willingness to know the answer approaches its own kind of utter openness. The question should be open for an answer, and the answer for the question. This pair exists only on terms of absolute reciprocity.

Openness gives the right to claim reciprocity, it merges simplicity and sincerity, some unintendedness in it is bought off with well-meaning goal-setting. Sincerity cherishes a gesture, in its undemandingness it is close to unselfishness, but an obsessive willingness to give is vicious in its finiteness. It is waiting for an answer. When it barely whispers, when it shouts its head off, when it is silent, proudly looking into the eyes. It is waiting for an answer.

Silence, like a word, has its reasons. And let no one hear any silence, a refusal to speak sounds more intense than the rumble of stupid gossip, than the buzz of one-way judgments, than the desperate plea to be heard. And let something be always hidden, but if what is to be said gets hidden, if there is a sense behind the unstable covering material of obliquity, is it worth to insist on camouflage?

The world is yet the same in other countries. The same poorly covered truth, the same secretly sick cities, the same poverty pouring with stink on the streets, which are being burned by the unrestrained sun. The same people, whose lives are largely diluted with cheap swill and shortened by slow carbs. The same (relatively) environmentally friendly transport takes them to extremely pointless, intoxicating consumption. The same unmistakable rate of love and hatred per square meter of living space, the same overdose of senseless actions for every centimeter of the uninhabited one. And the same someone looks at it from above playing with expiring common sense.

Don’t even think about: this is not a dream.

The text comprises references to Tim Radya’s works: “Your move”, “Figure #2: Game”, “The brighter light is/ the lesser one sees”, “I can see you” (from series “Without wasting words”), “Sky”, “Brighter than us”, “If only I could embrace you”, “Hey you, love me”, “You crucify freedom, but the human soul knows no shackles!”, “Idle talk. 24/7”, “What are we? Where do we come from? Where are we going?”, “Let everyone hear my silence”, “Something is always hidden”, “The world is yet the same in other countries”, “This is not a dream”.